I never have to remind my kids to move or to be active at home. That might be because we don’t have a t.v. or simply because they are young. Children are naturally fidgety and fit. It’s so tempting to holler at rambunctious rugrats to “Sit Still!” But here in America, where we are known for our fatness, should we really do that?

Tracy’s little man understands home fitness and handstands already. However, children have the same risk factors for obesity as adults. According to Pediatrics, the Official Journal of the American Academy of Pediatrics, The Bogalusa Heart Study which did seven cross-sectional studies of 9,167 kids ages 5 to 17 between 1973 and 1994, showed that a child with high fasting insulin (too much sugar in their diet) was 12.4 times more likely to be obese later in life! Kids with high systolic blood pressure (bottom number of pressure reading) had 4.5 times higher risk of obesity, those with high triglycerides were over 7 times more likely be overweight as adults! 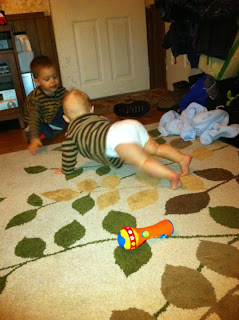 Movement is still a delight to little Cameron Lee (above) who is unknowingly doing a perfect Plank Pose, and while exercise has been shown to lower risk factors like heart disease, diabetes and high blood pressure, what you feed them is still very important. Nutrition and exercise aren’t do-or-die for them yet. For them, fruit and fitness are just pure fun. As parents and guardians, let’s work super hard to keep it that way, so that home health and fitness aren’t a fight for them later in life.