Fit2B now has several advanced routines in which I teach strenuous arm balances and moves that put you upside down where your hips are higher than your head: My Wall Workout, the Fusion Mixes, Balanced Inversions, and a couple others. They’re fun routines and not “dangerous” at all. They can also feel good when the pelvis is cramping. So why should women maybe avoid inversions when menstruating?

To start with – a personal note:

I have been participating in an RYT-200 training for which I contributed a chapter on diastasis recti awareness. As would be fitting, I’ve been on my cycle on 5 out of 6 training weekends this year where the head teacher, Tara McGuire, is excellent at cueing which poses to modify during menstruation. I do my best to follow those cues, and it has been good timing for my personal education as I ponder putting together another PMS routine.

On a recent training weekend, though, nearly every pose had us upside down, and I was feeling stubborn.

I had to at least “try” a few of them, right?!! Tara was cueing several asana {poses} that I haven’t tried, and others with new approaches and methods, and I just couldn’t resist!

Seriously, I’m like a kid in a candy store whenever I do continuing ed trainings. There’s just so much to explore, sample and learn!

But… People, my cramps were awful later that day!

I seldom have cramps.

I used to have them.

Horrible ones that wrapped around my whole pelvis and made my crotch ache so bad I could barely walk. But I just don’t get them anymore since I committed to a protocol of taking oral magnesium, soaking in one 6-cup espom salt bath each weak, and doing all my PMS stretches in this routine that I filmed for Fit2B.

I got them this weekend, though, and I blame my desire to “just try and see” if I could toe the line.

Hmmm… I’m realizing once more, as I write this, where my kids get their desire to push the limits…Sigh.

It’s interesting to note that in all my 20+ years of working in the fitness industry (started when I was 16) and despite my degree, certifications, workshops attended, and collaboration with other experts – I have never EVER been directly advised to avoid inversions during menstruation until this training. 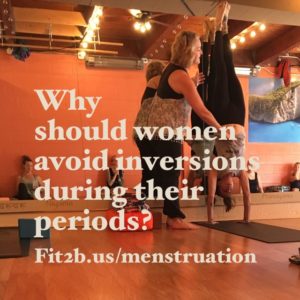 Further discussion in the training with other instructors brought up a very good point: It’s not about letting “some old yoga dude” tell us women what to do when we are on our cycles, but it’s about being sure our practice of motion serves us.

We do not serve our fitness practice. It should serve us.

Let me say that again: We do not serve our fitness practice. It should serve us.

Once more: We do not serve our fitness practice. It should serve us.

If the way in which we practice fitness harms us, it is not serving us, and that violates many principles of basic self-care and Yoga which teaches non self-harm (ahimsa).

It’s not that inversions are dangerous or “harming” per se, and this is edited to clarify that avoiding inversions isn’t about the archaic theory that they can cause “backward flow” and endometriosis. Those things weren’t even mentioned in the training. It was more about honoring the work of our bodies.

Also, this website Fit2B serves women whose cores do NOT work like functional cores. We serve women with dysfunctional cores that have been compromised by diastasis recti, pelvic organ prolapse, hernia, abdominal surgeries, avulsions in their pelvic floor, and other issues which have an impact on uterine positioning and function.

A healthy, functional core may not allow the uterus to be affected at all by any asana during a woman’s cycle. But a damaged core requires extra thought and attention, and having worked with thousands of women worldwide, I can speak to how we can’t leave any stone unturned when it comes to helping women figure out their personal fitness needs.

I’ve often suspected that avoiding being upside down makes sense due to blood flow and “energetics” as some call it, but this is what the training spelled out as to why inversions could be a problem.

Why should women consider avoiding inversions during menstruation?

Put simply: Being upside down for longer than several steadying breaths, with gravity opposing the work of your uterus to contract and clean you out… well, is that working with nature or against it?

Don’t over-think this. Mild declined positions (like a shoulder bridge that helps you connect with your pelvic floor better) are fine. It’s the major upside down ones with legs over head, balancing poses, and possibly also “tipi” or downward dog pose, that could be problematic.

So just for a few days, why not modify to upright positions, do Adho Mukha Svanasana (down dog) with hands on walls, and allow your body some healing time with a focus on gentler moves?

Another personal note about my body’s response to the inversion practice while on my cycle:

At our meal after the 2 hour practice time, I felt like I couldn’t put more than 5 words together. I had only done a few of the inversions during the practice and only held them momentarily to get the feel of them. But afterward, I was stumbling all over my words! So I said, “Gosh I’m having trouble talking!” Then the head instructor, Tara, said it was because my body’s energy and blood wants to be in my pelvis during my cycle, but inversions forced it to my head, but once I was upright again, there’s a fight in the core over where to send the blood, and it’s not to the speech part of the brain for sure!

Yes, this is anecdotal, but it made sense to me.

As you were reading, you may have noticed there were a lot of links connected to more information. But let me make it even easier for you:

Read about our PMS Routine here + get some practical tips for coping with cramps!

If you’re a yoga instructor, read this important set of tips for making your classes more DR aware

Not a member of Fit2B yet? Learn more about membership here!

One thought on “Why Should Women Avoid Inversions During Menstruation?”